Allthrough my career I´ve been deligted to participate in many very interesting projects. Most of the projects are my own visions and commissions in my design, some are corporations, some are executing other designers visions and some are maintenance of royal, national and historic silver. I’ve collected a couple of the most interesting pieces and project on this page. Enjoy. 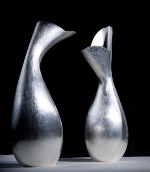 Heureka series . Winning the KGH-Prize started a fantastic flow of work. The water pitchers that I created for the commissioned work was the beginning of the “Heureka” series that I’ve been developing on ever since. I’ve been doing a lot of these pieces, mostly pitchers in all sizes, but also cups and bowls.

“Penguin” . The “Heureka” series have been extensively exhibited around Europe, among others at the “Silbertriennale 2010”, where it was spotted by “Robbe & Berking” for production in super polished Silver and Silver plated. “Robbe & Berking” produces the pitchers in two sizes and promotes them worldwide under the name “Penguin”. Thereby these pieces was the first Danish designed silver hollowware set into production in 20 years. I am of course very honoured and proud to be the one to break this stalemate. It is a very interesting process to groom my work for production and I would very much like for more of my pieces to move in that direction. Most of my work has the basic potential for rational production in all materials.

Apart from the birdlike shapes of “Heureka – Penguin” I also designed a “Heureka – Flower” and a “Heureka – Heart” version. Also in sterling silver and with my matte finish trademark.

Matte finish . With most of my pieces I use a matte finish that over time has become a trademark for my work. I do work with many kinds of finish depending on the theme of the individual piece. The matte finish is a finish that I find sets the Silver pieces better apart from their surroundings than the traditional polished surfaces of silver hollowware. It also gives the silver a much softer look that lives up to the saying from Georg Jensen that “Silver has the glow of Scandinavian moonlight”. It sure does.

Frankenstein Silver . I like to work on larger series when possible. It gives a opportunity to explore and develop on a subject. There are always more to find and never enough time. But sometimes some subject sticks over a longer period. This is the case of “Frankenstein Silver”. Like so many good things in life it started with a coincidence.
I was riding my bike to my workshop and somebody had thrown a bottle on the road. I had to swerve dangerously to avoid the broken glass. And I of course cursed who ever threw the bottle and drove on. Until it hit me that I could make use of some of the bottle parts. And it was also the polite thing to do to pick up the glass so that nobody else would get hurt. Very nice of me, right!
What I picked up was a patent bottle top. I actually didn’t know what I wanted it for, I just did!

It was laying around on my table for a long while until I found out what to do with it. Well of course it turned into a bottleneck on a silver bottle. Obviously. I just made it as a little pause of fun and thought it would be  the last of it. But I was wrong.
It was actually very much fun do work this way and it also ignited a concept. A kind of double concept. One part was combining found objects and silver. Working with the opposites of those two elements of being valued and discarded. Silver of course being the “Family silver” that you never ever discard. And found objects that has no value what so ever. On top of this I set a rule that I was not allowed to bye anything for the project. I had to use whatever I already had, what I found, stole ;-), was given or traded for. I was not allowed to buy anything. Nothing at all. I had to put the things together from what was a hand. It occurred to me that this was how Dr. Frankenstein build his monster. Piece by piece. Therefor “Frankenstein Silver”. I still upholds the rules. I don’t buy anything for the pieces. And that challenges my traditional training as a Danish Silversmith. I am trained to control the silver and to plan and organize every step of the crafting process. This is the other way around. Here I have to organize my craft around the pieces that I have at hand. And its fun. 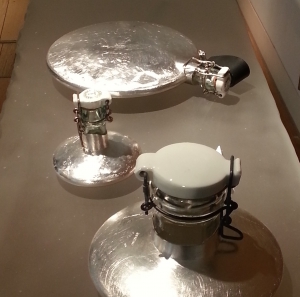 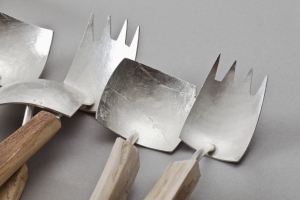 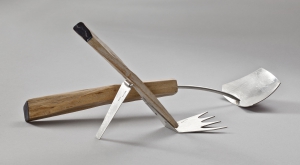 The concept has developed into different lines of use: Bottles, Flasks, Cutlery, Tables, Trays and Bowls.

Tivoli . My Tivoli series developed from utilizing all my silver scraping as in the Frankenstein project. However innovative and Lasse–like it relates much more to the straight controlled lines of traditional silversmithing than the anarchistic elements of Frankenstein. It’s much more neeit but still needs to end up with the unique individuality that always is the goal of all of my designs. Every project has it’s own potential and challenges. @ . The project startet up with wine goblets in 2010 (although I have initial models much older than that). Since then it’s been popping up in the back of my mind and was again realised as whisky tumblers in 2015. Just to slide a bit back into the archives. Sometimes projects develope like that. They kinda await the right timing. This right timing came about in my residency at Fox Silver in London 2018-19. @ . The artist in residence program was an open inspiration logic where we tried out three to four different potentials before settling on the Tivoli project. Thats often how inspiration works, up and down, back and forth until suddenly the pieces fall into place. So the main bulk of the Tivoli design connects heavily to London.

The Tivoli design has its inspiration from the classic beloved Ferriswheel in Tivoli Copenhagen. The gondolas is shaped as hot air balloons that seems to lift you over the rooftops of Copenhagen.

As children our grandmother invited the whole family to the Tivoli gardens once a year and the Ferriswheel was one of the impressing things that an old lady could do with her 5 years old grandchildren. Fantastic. To a 5 year old it was really flying high. Even today where the Ferriswheel seem somewhat smaller it is still a fantastic vision of grandmothers and grandchildren riding it. Just as it should be in Tivoli.

Tivoli holds a permanent place in the hearts of all Danes and even if you think you’ve outgrown it you haven’t. The Ferriswheel is one of the most iconic features and even if it is 80 years old and only 20 meters high it one of those things I’ll remember my whole life.

In the Tivoli series I have designed Pitchers in all sizes from large 1L water or 0,8L wine over 0,5L points and smaller milk jugs, creames and tiny whisky water. Any wishable size. Wine and water goblets and whisky tumblers in silver or blown glass. 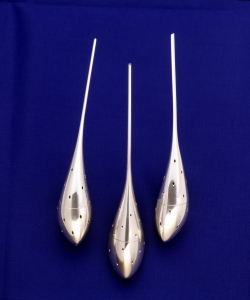 Drops . Teainfusers. One of my iconic designs that many in the international silversmithing community knows whitout knowing I’m the designer is my dropshaped Teainfusers.

They are about 25 years old but still looks like they are designed for tomorrow.

When I came up with the design in the late 90ths the style of work in contemporary silversmithing was swinging towards the handheld style that most contemporary artists are working in today. So my Teainfusers that pointed more towards Stanley Kubrick’s Space Odyssey straight up became an apostrophe to history. The Teainfusers have as one of only two selected pieces from Scandinavian contemporary silversmithing been extensively exhibited in more or less all European countries as part of ”Scandinavian Design – Beyond the Myth” 2003-06.

I’ve always been proud of them and think that they are very beautiful. I tend to think that about most of my pieces but these holds a special place in my self image. It still baffles me that I designed them because they are a humongous step in design from my hand and I cannot for the life of me remember how they came about. I know that didn’t see something and then made my own version. I don’t do that. But I must have seen, heard, smelled, felt something that turned into this.

The only thing I can remember is the feeling of an internal buildup that suddenly spilled over. I’ve tried these build ups a couple of times since and maybe it’s just because that was the first one. I expect that most artists experience these shifts like Picasso had a famous blue period this was my drop period.

I know that I in my day to day designing don’t experience artistic doubt and fear like many of my colleagues seems to portray. I instead do spend time trying to keep my creativity to a kinda straight and narrow instead of going of the reservation all the time. There is always some kind of distraction going on in the side galleries and I constantly have to remind myself to stay the course. Its not a great sacrifice because there’s just as much fun and challenges on the course as off it. But after a while it always ends up in a buildup that spills over. And then the fun and games starts all over again. @

I’ve come to expect these buildups once and while. By now I know that the last periode of time before the spill I’ll be increasingly tense and annoyed. Impatient I guess. The thing is that I know its coming but I don’t know when or what it’ll be.

Even if I do find it a bit annoying it keeps it interesting. And if it turns out like the Drops its not so bad.

Fun fact: A teainfuser on a stand are constructed by 21 individually crafted pieces of silver. Lots of work to make it look simple and elegant.